Curious if they had done adaptations, turns out they have. In 1968 they did “All the Sweet Buttermilk” which is amazing to me since I wrote an adaption screen play for this when I was in school for one of my film courses. Always thought it would be a great short to produce. Would love to see what RTÉ did with it.  One particular production still from “All the Sweet Buttermilk” is here but search for “Happy as Larry” and the still show up from the 1967 production and  “God’s Gentry” was in 1974, http://www.rte.ie/archives/

Happy as Larry performed by the Birmingham Repertory Theatre Company

Randomly found a bunch of images from the production of Happy as Larry by the Birmingham Repertory Theatre Company. Check them out here.

The PLAYBILL has “Happy As Larry” 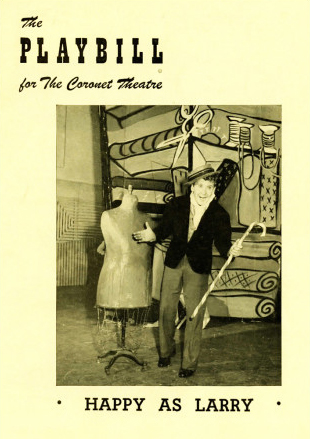 Playbill Cover for Happy as Larry at the Coronet Theatre is in their archive! Click here to check it out. It didn’t do well on Broadway, but they they tried to make a comedy into a musical.