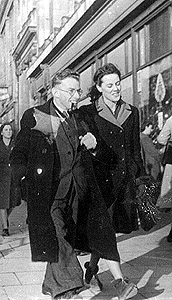 Donagh MacDonagh (1912-1968) was a noted poet who grew interested in the utility of verse in the theatre and was successful with Happy as Larry, God’s Gentry and Step-in-the-Hollow as well as Lady Spider which occupied him from 1956 to 1958.

He took his BA and MA in English Literature at University College Dublin and concurrently read for the bar at King’s Inn in Dublin, taking his BA and being called to the bar in a matter of three years.

He practised law for ten years and sat as a District Justice for over twenty years. He was a son of the martyred poet and patriot Thomas MacDonagh of the Easter Rising in 1916

This site uses Akismet to reduce spam. Learn how your comment data is processed.